The modern state of Kerala owes a lot to the past rulers of the region.

The rulers following the memorable reign of Marthanda Varma and Dharmaraja continued to live up to the high standards set by them. Though some reigned for exceptionally short periods, they served the Supreme Sovereign – Sree Padmanabha Swamy, with utmost commitment.

At this time there were several political changes in the country with the British expanding their hold. Travancore, allied with the East India Company took part in the Third Anglo-Mysore War (1790-92) since Tipu once again attacked Travancore. The Dewan of Travancore – Kesava Pillai, led the forces and was victorious. In ‘The Battle of Seringapatam’ (1792), Tipu was defeated by the British who then established supremacy over Malabar. The Company intended to reduce the independent status of Travancore. However, this did not happen. Travancore did not come under British rule. The State remained a princely state. British signed treaties of subsidiary alliance with King of Travancore in 1795. There was no clause in the treaty enabling the Company to interfere in the internal affairs.

Below, is the summary of the nine rulers who reigned after Dharmaraja and continued to modernize the Royal State of Travancore.

In spite of adverse financial circumstances, the King carried on the Murajapam and Lakhshadeepam at the Temple in an uncompromising way. A staunch devotee, he passed away very young. 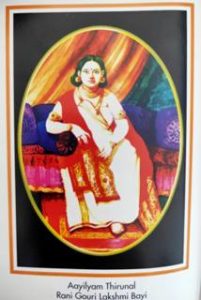 She received the Sword of Sovereignty at the Temple at the young age of 20. In four years there was remarkable progress. The Rani granted large allowances to Brahmins performing rituals at the temples and gracefully walked the Arat procession with the sacred sword. She abolished slavery of any kind and ended heavy taxations. Finances of the State were brought back to a state of surplus. Two Western medical dispensaries were started in 1819. 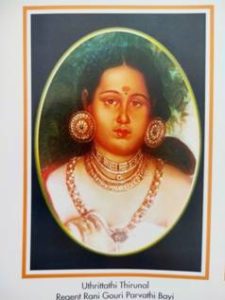 The 13-year-old came to the throne and started ruling under the guidance of her brother-in-law and Col. Monroe. In addition to the structural work of the Temple, she was deeply engaged in the proper functioning of the Temple and matters like the code of conduct and purificatory formalities. The Rani made several reforms for the welfare of women, education, promotion of Malayalam, tax relief, etc. A very big leap was made in the education of the State.

The Edict of Free Education – The 1941 census report by the Census Commissioner of Travancore, stated that a high level of literacy achieved by the State of Travancore (major part of today’s Kerala) was the result of the successive rulers’ keen interest in education improvement (Census of India, 1941, Vol.XXXV, Part I, Page 155). The report made reference to the proclamation issued by the Rani (1817) directing that Travancore shall meet the entire cost of education of its people. The Rani’s proclamation of appointing one Malayalam and one Tamil teacher in every district school at 7 Rupees per month, continues to be displayed at the University College. 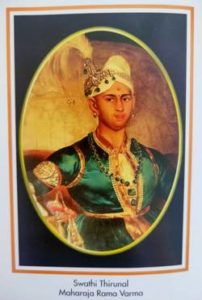 A master of music, the King offered several musical compositions to the Deity. His court had international representation. He got a new Siveli Moorti of the Deity made in gold. To facilitate devotees who came from different parts of India, he had appointed guides speaking several languages. Parayanam of Puranas and singing of Bhaja Govindam was started on a daily basis. The King was known as the incarnation of Sree Narasimha Swamy owing to an incident witnessed by the public in the Arat Procession. An elephant from the procession began to aggressively approach the King. The King remained calm and unflinchingly stood before the advancing elephant. By his one look of the King, its wild mood settled and the elephant went down on his knees as if totally mesmerized, before the great Kulasekhara Perumal.

The First Code of Regulations of Travancore, forming the basis of the current judicial system was formulated under him. Maharaja’s Free School (University College of today) was established to educate in English. Trivandrum Observatory was set up with sophisticated instruments in 1837 AD. Grantha-Pura (today’s Oriental Manuscripts Library) and a book house that was the forerunner to the Trivandrum Public Library was made. Thycaud Dispensary was made a charitable hospital with a separate wing for women. He also established a veterinary hospital. He abolished any kind of ill-treatment of criminals. Allowance was given to people who lost the breadwinner of their family due to illness or accident. The first-ever census of the State taken.

The Maharaja was a scholar-writer and a patron of Kathakali. He got the Padma Teertham cleaned and the whole city was beautified for the Murajapam of 1857 AD. He was very involved in the study of modern sciences and took medical training. He worked at the Palace dispensary where he vaccinated and treated people himself.

The King was strict in the supervision of Temple administration. In 1873 the Thiru Ampati Sree Krishna murti was repaired by him. He patronized arts and literature.

His reign saw a terrible famine. All possible measures were taken to reduce distress. Heavy taxes were abolished and the tobacco monopoly ended. More hospitals were set up including the Oolampara Mental Hospital (1870). Arts College, University College (1866) and Law College were made. Foundation was laid for the Civil Hospital (today’s General Hospital). Advancement was made for the education of girls. The Napier Museum, Varkala Tunnel 1, Ambalappuzkha pier and lighthouse, Public Works Dept, Public gardens, Huzoor Cutchery (all 3 of Thiruvananthapuram), the Secretariat as well as the Punalur suspension bridge were all constructed. The RST was recognized as the ‘Model State’ by the British Government. 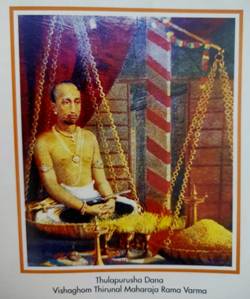 The King was known for his precious contribution to journals. He also wrote journals describing the Temple royal offerings of Thulapurusha Danam and Hiranyagarbham. He got the roof of the Bhadradeepa Mandapam done in copper.

He introduced tapioca into Kerala. The thought behind it was that if ever the price of rice rose too much, no one in the State of Sree Padmanabha should go hungry. Tea manufacture progressed, locomotives were made available, and revenue settlements were done. 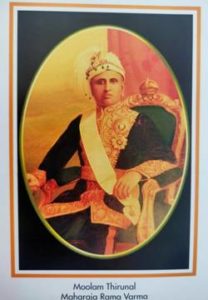 Known to be very sincere, he made several progressive reforms in the Temple administration.

Two Incidents with the British – Lord Curzon (Viceroy of India) was on an official visit to Travancore. He was driving with the King in a coach, as they crossed the eastern Gopuram of Sree Padmanabha Swamy Temple. The King stopped, removed his shoes and folded his hands to offer his respects. The Viceroy remarked “Is this where the heathens say their prayers?” or “Is this where idle Brahmins are fed?” (one of the two were his statements). The Maharaja stayed silent and on reaching destination sent a message to the authorities announcing his total disassociation with the functions organized by the Viceroy. Lord Curzon apologized in writing, after which the King agreed to participate.

In another incident, the Government of India (under King George) ruled that all the Princes of India must accept the Emperor as an Overlord. The King refused, stating that Sree Padmanabha Swamy was his only Overlord.

Largescale social, administrative and political reforms were made. The dental wing was added to the General Hospital (1913), Ophthalmic Hospital (1906) was set up. Ayurveda College (1913) was established and homeopathy introduced. Connemara Market, Victoria Jubilee Town Hall, Oriental Manuscripts Library were made. A home for leprosy patients was set up and came to be known as the best maintained in India. Panchayat Courts and single House of Legislature were established marking the starting point of democratic rule. Travancore was again given the status of the ‘Model State’ by the British Government.

She abolished animal sacrifices and the Devadasi system that was still followed in some temples.

Electrification of roads and the construction of Cherthala-Alappuzha and Kollam-Alappuzha roads was done. Canals linked to River Pampa were made for irrigation.

As one can see from just a few examples given in this brief essay, the above rajas and ranis enriched the development of the RST. They offered their heart and soul to serve their people beloved master, Sree Padmanabha Swamy.

The next and last section shall talk about the glorious PND Sree Chithira Thirunal Rama Varma – the last Dasa in power as a ruler. He was indeed a legend and institute in himself. After touching upon the key highlights of his glorious reign, this series of essays shall conclude.

Previous PostHindu-Buddhist Conflict in the Chachnama: Fact or Fiction?Next Post‘Flight of the Deity’ from Martand Temple, Kashmir – Part 1