Without an ounce of exaggeration, basing our knowledge on clear cut facts, it is evident how the classic rulers of Travancore and their weighty contributions made Kerala the modern state we see today. 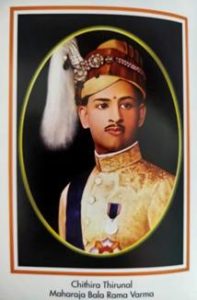 He was a legendary royal personality and a humble Dasa of Sree Padmanabha Swamy. He made lavish offerings of gold to the Temple and also dealt with the renovation work post a fire that broke out on the premises. He got all the Vahanas of the deities redone and was fully committed to the betterment of the Temple. His contributions to the Temple are too exhaustive to enlist here. So the main highlights will be given in this essay.

The Temple Entry Proclamation made by him has been known to be the most socially progressive and religiously liberal ordinance enacted in India. Read below –

Profoundly convinced of the truth and validity of Our religion, believing that it is based on divine guidance and on an all-comprehending toleration, knowing that in its practice it has, throughout the centuries, adapted itself to the needs of changing times, solicitous that none of our Hindu subjects should, by reason of birth, or caste or community, be denied the consolations and solace of the Hindu faith, We have decided and hereby declare, ordain and command that, subject to such rules and conditions as may be laid down and imposed by Us for preserving their proper atmosphere and maintaining their rituals and observances, there should henceforth be no restriction placed on any Hindu by birth or religion in entering or worshipping at the temples controlled by Us and Our Government.

It was made on the eve of Maharaja Chithira Rama Varma’s twenty-fourth birthday. Naturally, he faced great opposition and several leaders and powerful people disassociated themselves with the temples coming under the State. However, the young Maharaja stood firm on his decision.

Mahatma Gandhi called the act a “Marvel of Modern India” and hailed Sree Chithira Thirunal as ‘Modern Ashoka’. Decades later the Government of India posthumously honoured him with a commemoration stamp too. This was released on the anniversary of the Proclamation.

Major establishments of the “modern Kerala” of today –

Several social reforms were made. He was the first King to abolish the death penalty in the whole of Asia. Water supply was made free too. There was compulsory free primary education given with 40 per cent of the budget allocated for over-all education.

Lord Wellington (Viceroy of India) declared “Your educational facilities are better than in any other part of the country and I may well say, any part of the world…” His statement elaborated that the RST is far ahead of any other state in terms of religious tolerance, legislative reforms, industry and economic development.

In 1949, the Government of India offered him the position of the Rajpramukh. However, he would not take the oath of Office1 as Rajpramukh. His only master was Sree Padmanabha Swamy and no other. Hence, a solution was found by which he was only to give an “assurance” to the Indian Government that he would do his best to protect, preserve and defend both Travancore and Cochin. This was a unique precedent in democratic history.

In 1950 CE, the Rajpramukh role ceased and India became a Republic. Now, his only position was that of the Dasa of Sree Padmanabha Swamy. Even then, the last Murajapam was done in a traditional and grand way in 1954 CE. In 1971, the Privy Purse too was abolished. Sree Chithra Thirunal had to sell several of his personal assets to fulfil the needs of the Temple.

It is heart-wrenching to read about how gradually every aspect of worship, festival, lamp lighting, food distribution, etc., was gradually downsized with several aspects that totally faded. There was great strife to maintain the magnificence of the Maha Kshetram and the Government did not contribute sufficiently. The Sree Padmanabha Swamy Temple Trust was created by Sree Chithira Thirunal and radical changes were made to make the functioning of the Temple fit into the contemporary situation. Temple lands were lost. The secular Government of India took over temples under Devaswom Board with the exception of Sree Padmanabhaswamy Temple, the management of which went through the intense struggle. The recent updates may be read here – Report by Pragyata

The last king, Chithira Thirunal Rama Varma is remembered with great admiration even today by the people of Kerala. Known for the boundless good he did and his extremely gentle and humble persona, he indeed mirrored the divine energy of his Master, Sree Padmanabha Swamy.

Without an ounce of exaggeration, basing our knowledge on clear cut facts, it is evident how the classic rulers of Travancore and their weighty contributions made Kerala the modern state we see today. Of course, in the past, it was rightfully given the position of being a “Model State”– and that too, not by self-declaration.

The whole of India is taught in school about Kerala being highly literate. However, I was astounded at the discovery that the State of Travancore had recorded highest literacy back in 1941, much before independence. And, all the prestigious institutes and fantastic buildings in the aesthetic city of Thiruvananthapuram owe their existence to the RFT. These discoveries also brought an end to many misconceptions regarding the governments that seem to receive credits inappropriately.

In addition to being exemplary rulers, the RFT was immersed in the service of Sree Padmanabha Swamy and the Temple in momentous ways. There were periods of financial lows and political unrest even in the remote past, but the rulers did whatever possible to maintain the glory of the Temple. We can see immense reverence and sacrifices made right from ancient times. The kings and queens represented the high Hindu ideals that gave great respect to all other religions too.

Despite the enormous change of tide, the profound dasya-bhava of the RFT towards Sree Padmanabha Swamy is as fresh and alive as it was through the centuries. It is evident when you read the books of or hear Aswathi Thirunal Thampuratti speak. All that you are left with is the lingering fragrance of a devotee’s heart. She stands up with great humility for the protection and preservation of Sanatana Dharma and our distinctive culture, representing the sentiment of all earnest Hindus. She continues her service at the lotus feet of Sree Padmanabha Swamy in every capacity possible.

It is her book, coupled with an inner indefinable force that inspired me to share these sublime riches of the Temple in the form of this humble offering. I request the forgiveness of Sree Padmanabha Swamy and Maa Aswathi Thirunal Thampuratti if, in process, there were errors made by me due to ignorance.

2. P. Menon – The story of the Integration of the Indian States, Chapter XIV, Pg.280