This period in the history of the Travancore kingdom set the stage for the modern state of Kerala.

The oldest known royal links with the Temple were that of the Ay Kings who ruled three centuries before Christ. The Royal Family of Travancore traces its origin to the Ays and the Chera rulers. The royal emblem of the Ays was an elephant, and that of the Royal State of Travancore was the elephant and the conch. It is this same symbol with minor alterations that is still used today by the Kerala State as its seal.

The modern period is of special importance to us for two reasons – one, to discover who the recent ruling Dasas of the Sree Padmanabhaswamy Temple were and second, to learn what all they did to create the unshakeable foundation of today’s developed Kerala. The latter is not a ‘miracle’ that suddenly happened in the last 73 years. 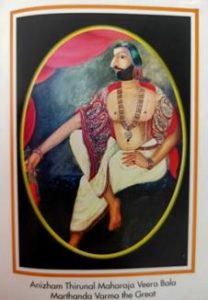 From the age of 14, Marthanda Varma demonstrated extraordinary administrative capabilities and was sharp and intuitive. His uncle, Veera Rama Varma, saw this potential and involved Marthanda Varma in the affairs of the State, early. As the Yuvaraja, he was made to represent the King on important occasions and gradually was handed over decision-making too. This was not taken well by the Kings two sons, who were hopeful of ending the existing matrilineal system of inheritance, for their own benefit. They conspired with feudal elements to prevent Marthanda Varma from becoming the king. Despite political aggression and threats of death, the shrewd Yuvaraja established his might and took to the throne.

He crushed the power of enemies and reorganized the entire administrative and financial system. He centralized authority, marking an entry into a glorious era. Marthanda Varma established a large, disciplined and well-equipped army. The King wished to recover the territories that were ruled by the earlier Venads. The boundaries of the RST were re-defined under his rule.

Battle of Colachel (10th August, 1741) – The north of Kerala was ruled by the Portuguese. Their power started weakening with the entry of the Dutch, who came initially for trade but soon got greedy as all colonizers did. In 1663 they captured Cochin and started inching southward. Marthanda Varma’s expansion into the pepper producing zones and his lack of expected ‘cooperation’ with the Dutch resulted in war. He successfully captured the Dutch forts. The Dutch landed through the sea, in Colachel from Ceylon and moved towards Kalkulam. The Dutch under the able Captain D’Lannoy were equipped with modern artillery (firearms) as opposed to the traditionally equipped and trained army of Travancore. A heroic war was waged and Marthanda Varma won a resounding victory. This was the epic end to the Dutch fantasy of ruling Kerala.

The Dutch prisoners of war were treated with respect. Hence, many decided to offer their services to the King. The far-sighted King made D’Lannoy the Valia Kappithan of the army and instructed him to take on large-scale strategic constructions. The main cantonments were at Padmanabhapuram, Trivandrum, Quilon. Forts were built at Padmanabhapuram, Udayagiri and Vattakottai. Watchtowers were also constructed in the once circular Kodukarai-Kanyakumari Fort on Nagercoil-Kanyakumari N.H. A standing army was trained on the European model and equipped with the latest weapons.

The Ponmana and Puthen dams were constructed addition to several tanks and reservoirs for better irrigation systems and supply of drinking water. An annual system of the budget was set up for public expenditure. Trade flourished and Travancore became the centre of art and literature too.

Highest of the Padmanabha Dasas – It was even before he became King, that Marthanda Varma started a large-scale renovation of the Temple. At that time, the RFT lived in Padmanabhapuram Palace (now in Tamil Nadu). Owing to the Kings intense reverence, a single room mansion there was dedicated to the Deity and a perpetual lamp was kept lit there.

Marthanda Varma started the work of the eastern Gopuram of the Temple. The reconstruction of the marvellous Ottakal Mandappam was done with a single stone slab. The first taluk, introduced as an administrative policy, was formed before the Ottakal Mandapam. It hence gained the name – Thiruvananthapuram Mandapathuvathukkal (in front of the Mandapam doorway).

The main reclining figure of Sree Padmanabha Swamy was reconstructed with 12008 Salagrams (brought from Nepal on elephant back) and coated with a very rare composition called Kattu-Sarkara-Yoggam that is used to make a moorti. Other important features like the four corridors running around the entire inner part of the temple with beautifully carved granite pillars were made. Mural paintings were done on the walls.

The collective and official offering of the entire State at the feet of Lord Padmanabha was made for the first time by Maharaja Marthanda Varma and reflects the epitome of devotion. He wished to surrender all – including the lands stretching from Kanyakumari to Paravur, ruled by him. 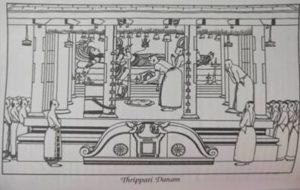 The sacred ceremony was carried out with the highest devotion. The Crown and all other symbols of royalty were offered to Sree Padmanabha Swamy with sacred Thulasi on the Mandapam. He submitted his sword which was known for its valour and received it back after the worship with the command that any further conquest by him or his successors should also be surrendered to Sree Padmanabha Swamy.

The deed of dedication (translated from Malayalam) –

“We Thrippapoor Keezhperur Veera Bala Marthanda Varma, Mootha Thiruvati (Senior member) of Thrippappoor and Sree Pandarakaryam Cheyvarakal, have this day, Wednesday the 5th day of the month of Thai, the seventh day of bright lunar fortnight with Saturn residing the eighth sign and Jupiter in the twelfth, Kollam 925, transfer my absolute gift and dedication, to endure as long as the Sun and Moon shall last, all the lands and functions appreciating thereto together with all rights and dignities, positions of honour and all other possessions that we have been hitherto enjoying as of right within the territories between the Thovala Fort in the east and the Kavana River in the West in favour of Perumal Sree Padmanabha Perumal. In token whereof we have this day executed this deed of absolute gift and dedication.” 1

This was a brief look at the reign of the legendary Marthanda Varma. Only a very exalted personality would be able to make such an offering to the Lord. He surrendered all that he had ever earned in life or was dear to him. From the throne that he acquired with such struggle to the territory he defended till the end. Everything was offered at the Lotus feet of his Master. 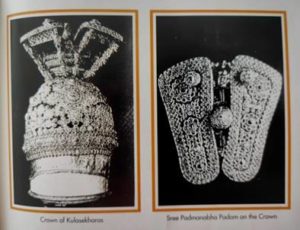 Since the Lord became the Supreme Sovereign, anything related to the State of Travancore was connected with the Temple and carried out in His domain by His Dasas and in His name. This had a great impact on legislation and the constitution of the State. After the Thrippati Danam, the rulers of Travancore were not crowned. The ancient crown was worn only once by each succeeding king, post the Hiranyagarbham ceremony. 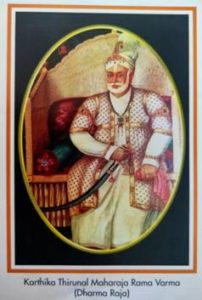 The title ‘Dharmaraja’ earned by the King itself reflects the high ideals he lived up to. He completed the majestic eastern Gopuram. The making of the magnificent elaborately sculptured Kulasekhara Mandapam2 with musical pillars was his major contribution. He erected the silver-plated flag mast for the Thiru Ampati Sree Krishna Temple in 1763 CE3. The Kochar canal was constructed for the free flow of water from Chittar into Padma Teertham of the Temple4. Large scale food distribution was commenced at the Temple.

The King was a composer and founded a new style of Kathakali presentation – the Thekkan (southern) School of Kathakali. Mohini–attam (a dance form) was introduced and evolved under his initiative. Dharmaraja shifted the capital from Padmanabhapuram to Thiruvananthapuram.

Travancore: Safe refuge for all

From the 1760s on, the Sultan of Mysore, Haider Ali, and his son Tipu Sultan made multiple invasions into Malabar. The Islamic barbarians wanted to establish their supremacy destroyed temples and churches, burnt houses, molested and raped women of other religions, and forcefully converted people to Islam. If not death threats, the cruel Islamists force-fed Hindus with beef, to convert them. A large number of refugees of various religions poured into the State of Travancore for protection. Even the moorti of Sree Guruvayoorappan from the Sree Krishna Guruvayoor Temple was brought by the priests for protection. Dharmaraja showered his abundance on the refugees. They were given lands, rights and full protection from the savages. The rulers of Cochin and Calicut also took shelter here.

Tipu dreamt of tethering his horse in the Temple since Dharmaraja refused to acknowledge the supremacy of Mysore over Travancore and rejected Tipu’s cold-blooded demand for the return of refugees. He made several attempts to invade Travancore. The strategic Nedumkotta fortification, made by D’Lannoy under the instruction of Dharmaraja, made Tipu’s military advance arduous. When he finally broke through the lines, monsoon broke out and the small but strong Travancore army defeated his troops and left Tipu with a physical limp. Humiliated and shamed, the plunderer reaped the fruit of his atrocities. The victorious soldiers brought Tipu’s dark green flag – a replica of the same was from then on carried in the Arat procession symbolizing the victory by Divine grace of Sree Padmanabha Swamy.

Despite the wars, development work continued. The Alleppey port was constructed – inviting traders, artists and labourers from other parts of the country to settle there. Kottar was developed into a commercial town and Chalai Bazar was made. Farmers were helped with loans and tax exemption. While momentous work was done by him for temples, he patronized other religions too and for this received a letter of appreciation from the Pope Clement II of Rome.5

These two great personalities served as perfect models of Dharmic rulers. They continue to be remembered in Malayali households for the historic work they did to serve and protect their people. These Dasas were an embodiment of high ideals and remained humble and committed at the lotus feet of Sree Padmanabha Swamy.

The next section of the series shall give a brief overview of nine rulers which includes three great Ranis. The period saw furthering of social and administrative reforms as well as major leaps in the field of education and western medicine. Hence, called Making of Modern Travancore – Continued.

1.3 State Archives (where the original Ola is now preserved)

5  5.1 P.Shangoony Menon – A History of Travancore

5.2 NagamAiya – The State Manual of Travancore

Previous PostThe Indian Conservative: A History of Indian Right-Wing ThoughtNext PostBack to the Elements – Objects, places, and symbols of worship