The essence of worship in Hinduism lies in recognizing the significance of the archetypical elements that define our world.

Indian cities and towns have a skyline adorned with temple peaks pushing towards the sky, huge peepal trees swaying gently covering the temple premises with their soothing shadow. The moment you enter the dwarfing temple door, a familiar scent of flowers, lit lamps and camphor lingers around you helping you focus. And as you step in ringing the overhung bell, looking through the smaller garbhagriha opening covered in fresh flowery colours and green basil leaves, the ‘power’ beckons you to lift your eyes and see the manifestation. A moment of realization, a direct gaze and everything else is forgotten.

The murtis of gods and goddesses are a matter of great study and academic interest for many. They have evolved over centuries through the influence and shraddha of various devotees, artists, and scholars. Murti worship is an important first step in moving towards the ultimate objective of Moksha in the Hindu doctrine. Murtis are an object of worship, carved elaborately keeping in mind the ‘Lakshan’ of the deity it represents. A mere stone in the form of a murti is not worshipped, that stature is obtained only when ‘Pran’ is installed with accompanying hymns and rituals.

Most of the gods and goddesses have multiple hands that showcase what they represent. Vishnu murtis are characterized by the presence of a Shankh(conch), Chakra, Gada and Lotus in all four hands respectively. Ganpati will have a laddu in one hand and Pash in another for sure. Laxmi stands on a lotus and is laden with ornaments. Saraswati plays the Veena as she carries a book in one of her hands. Surya devta is depicted with a fully blooming lotus in each hand. Shri Ram has a bow and arrow in his hands with a sombre soothing expression on his beautiful face. And my favourite, Shri Krishna stands with his leg turned and a captivating smile, holding a flute and donning a peacock feather.

We are all familiar with murtis of gods and goddesses, be it at home or in temples, throughout this holy land called India. But sometimes this object of worship does not even look human, it is not a murti but is something else! A symbol, a memory, a legend, a miracle taking the shape of our belief… 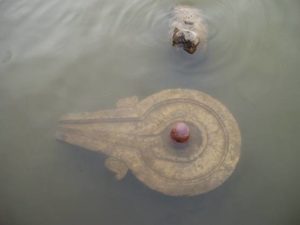 Look at the Shivlinga… we worship Shiva, the supreme destroyer not in his human form but as a symbol. We do know how Shiva is to be depicted, with long hair curls, and a serpent around the neck, with the moon on his head and Ganga descending from his hair. He is the one wearing the tiger skin and resides in the Smashan, cremation ground. But what we worship in temples and homes is the symbol of Shankar and Parvati together, the supreme union of Purush and Prakriti, in unmistakable representation.

Shivlinga or Pind, as it is sometimes called, has been worshipped for several millennia in India. There are objects similar to Shivlinga which are found in the Harappan/Sindhu-Saraswati culture sites. Shivlinga is found in different forms. Some of them are natural. Kedarnath in Uttarakhand for one is a natural mound, and the Amarnath linga in Kashmir famously called as ‘Barfani Baba’ gets ‘formed’ due to water percolating and freezing to ice in the form of a huge Shivlinga. The ones which are sculpted exhibit tremendous variety. The massive one at Bhojpur, Madhya Pradesh, the one submerged in water as Varanasi, the huge one at Lingraj, Bhubaneshwar, the several, almost thousands of them at Sirsi in Karnataka. There are carved faces on the Shivlinga as well. Gudimallam in Andhra is the place where the oldest such Mukhlinga is found. There can be multiple faces as well, from one to five! One in the premises of the Laxmi-Narayan Temple at Dhom has five faces. Sometimes there are several small carvings on the entire Shivlinga known as Sahastraling. Surprisingly, these are found outside the main temple, as one found in Dandeshwar, Uttarakhand. 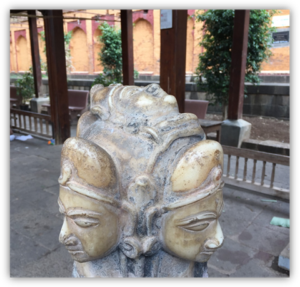 People of this land worship all these tangible and intangible forms, giving them a name and location and a presence soaked in faith. Mahadeva, the supreme god is also worshipped in the form of these five basic elements in southern India.

The Panch ‘Maha-Bhut’ which are earth, water, air, fire and space are all worshipped. The presence of Shiva at the Natraja temple in Chidambaram represents akasha or space. Famously known as Chidambaram Rahasya, the empty inner sanctum accentuated by a strand of 51 Bilva leaves is the formless existence of Mahadeva. Jambukeswara at Thiruvanaikovil is water himself, the live spring in the Garbhagriha fills the atmosphere with the divine sound of flowing water. Kanchi Ekambareswara is an earthen form of Shiva and hence there is no constant Abhishekam which is a characteristic feature of any Shivlinga worship. And finally, Kalahasteeswara is the manifestation of Wind. It is a mystery how the lamp constantly flickers inside the sanctum where there is no air passage. But then again, the Vayu Maha Bhut is there for us to experience! Thiruvannamalai Arunachaleswara is Fire itself. The Annamalai mountain standing tall behind the temple is geologically very old and could have been a volcano as per many experts. These five temples are huge and immensely popular religious destinations. Also, the history of these temples easily goes back to 1500-2000 years. 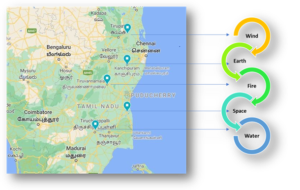 Volcanic mountains and flames arising from the natural gas are a part of Hindu worship. Jawalaji is a celebrated destination nestled in Kangra Valley of Himachal, overlooking the mighty Beas river rushing towards the Punjab plains. The temple deity is a group of 5 to 7 flames rising from the earth in a mountain cave since time immemorial. The Purana story tells us about Sati, wife of Shiva, upset with the treatment meted by her father to Shiva, she jumps into the sacred fire of Yadnya. Shiv-Shankar distraught by this unfortunate turn of events, takes the still body of his wife and dances in abandon, with grief, anger, and helplessness. It is believed that Sati’s organs fell all over the Indian subcontinent in this divine ‘shok’ giving rise to 51 Shaktee peeths or power centres. Her tongue fell in these lush Himalayan valleys and manifested themselves as rising, leaping blue golden flames.

Assam, the land of the rising sun for the rest of India is guarded by Kamakhya. The celebrated temple is located in Guwahati in the valley carved by the mighty Brahmaputra, flowing and forming a large expanse in the land bound by Himalayan foothills all around. Kamakhya is where Sati’s Yoni, the divine spirit of creation had fallen during the furious Tandav of Shankar for the loss of his beloved. The temple is an example of beautiful eastern Indian temple architecture with a domed roof formed by curved vertical lines.

The important aspect is the presence of the deity. There is no murti, but a shallow opening in the ground representing female reproductive form, covered in water from a live spring below, just like primordial fluid giving birth to this universe. The temple is crowded with pilgrims throughout the year. There is another murti of the goddess with nine hands which is also worshipped, however ‘Kamakhya’ resides in this place on the ground, deeply connected with earth and water, in formless existence of divine eternity! 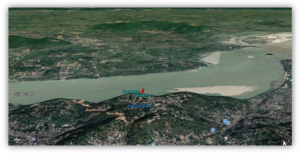 Simple raw, most natural, uncarved, unadorned stones also have the power to attract worshippers. Shani Shinganapur is a well-known place of worship of Shani, the Saturn god. The temple is unique because it is no temple, but an ‘open to sky’ platform on which stands a five feet sheer black stone slab. This is the manifestation of Shani and people revere it with the same faith.

Lonar, the place famous for a volcanic crater has several temples around the crater lake and in the town too. One interesting temple belongs to ‘Adava Maruti’.  ‘Aadava’ means one in a sleeping state. It is not really a Maruti (Hanuman) murti but looks like a huge rock all swathed in ‘Shendoor’. Apparently, the magnetic needle shows peculiar activity in the vicinity of this rock

Shaligram, worshipped as a symbolic form of Vishnu in Vaishnava tradition are also stones found naturally in the Gandaki river. The polished rounded stones with fossil impressions are a worshipper’s delight as they represent the presence of Bhagavan Vishnu.

Stones found in the Narmada river, shining and perfectly rounded because of flowing water caressing every sharp contour also symbolize the essence of Shiv-Shankar. These basic natural forms help us connect more with our inner gods and goddesses, a more humbling truth emphasising itself by equating the supreme powers with the simplest of the objects and ultimately to our core, within our self.

Our traditions are replete with such diversity and cultural variety as every household has atleast a small corner to house murtis and a place to pray. Apart from beautifully carved murtis of various gods and goddesses, some also have other interesting artefacts. ‘Masks’ made of metals, silver or copper, sometimes with alloys like brass, are the faces carved of the worshipped deity. They are taken out, polished and decorated with fanfare during specific festivals.. ‘Tak’ is also similar but pentagonal or square in shape. These are metal sheets with face carvings indicating the clan deity. In short, these are like local instances of the main deity of the clan or community.  Hence, they are worshipped just like any other murti, as they represent the original deity in its essence.

Our legacy is rich. We have come a long way from spherical shapes found in the Indus -Saraswati civilization up to the photographs of deities. Even then, the appeal of these raw primitive forms of worship and faith continue to charm our minds.

And finally, we all know that be it stones, waters, mountains, fires, winds or skies, it is still one consciousness that binds us together.

Manisha has been a lifelong student of India's culture, history and has travelled extensively to follow her passions. She has tried to do a fine balancing act between these interests and her day job in Information Technology.