Various kings during the medieval period served their Swamy by offering resistance against invading forces.

From ancient times, the sacred presence of Sree Padmanabhaswamy Temple was of utmost importance to the rulers of the land as their reverence for their Deity new no bounds. This essay summarizes the major highlights of the period between the 1200s and early 1700s. The detailing on certain kings or Dasas is disproportionately large due to significant events during their reign or owing to their strong character.

Invasion of Malik Kafur – ‘Sangramadheera’ Ravi Varma Kulasekhara was a brave and glorious ruler. During his reign, the Chola Empire had weakened and a civil war was on amongst the Pandayas (they being the two strong dynasties of South India). Taking advantage of this, Malik Kafur, the General of Allaudin Khilji attempted to invade the south. One of the Pandayas, aligned with Malik Kafur against his brother to establish himself as the king. The forces of Sundarapandyan and Malik Kafur defeated the army of Veerapandyan. Malik Kafur then destroyed the army of Sundarapandan and entered Madurai with the desire to loot and destroy Meenakshi Amman Temple. Having heard of this, Sangramadheera Ravi Varma Kulasekhara marched into Madurai, establishing his authority over the Pandaya kingdom. The troops of Malik Kafur were crushed by him and he continued moving northward to push out the Islamic barbarians. Malik Kafur was also badly defeated in Kanchipuram. The victorious Venad ruler was given the title of Tribhuvana Chakravarti – ruler of Chera, Chola and Pandaya kingdoms. His empire stretched from Kollam (the capital) to Kanchipuram.

Malik Kafur and his troops had destroyed several temples. Right in the start of his advance, several of the murtis of Deities from various temples were rushed to Thiruvananthapuram for safekeeping. Post this victory, they were returned to the respective temples. Thereafter, there was no chance of the Islamic plunderers to enter the well-consolidated southern part of India which now had a strong military power too. This devout King played a crucial role in the protection of Sanatana Dharma, its temples and authentic heritage.

A great administrator, he was a strict follower of the ancient Hindu law books – those of Manu, Suka and Yagyavalkya. Giving protection to the weak and upholding justice was done perfectly by him. The Temple was also administered by Sabhas or councils. A sovereign system of administration was followed during these times.

A renowned poet himself, he gave patronage to poets, artists and scholars. He was praised as the ‘Master and protector of the three Vedas’ as found in the Sreerangam inscriptions.

There was great material prosperity for the kingdom during his reign and trade flourished. The wealthy land drew travellers from around the world as Ibn Battuta (1324-25) referred to Kollam as ‘one of the finest cities in Malabar with magnificent markets and wealthy merchants’. Marco Polo (1275) also visited.

This King was known for his martial powers that kept a strong check on Islamic advance. The kingdom thrived under his reign. He streamlined the wages of Temple workers and also made a Goshala and Deepagraham in the Temple. 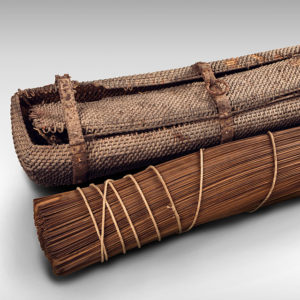 Mathilakam Records (temple records) – In 1425 CE, King Veera Iravi Iravi Varma did intensive and important work in bringing together the Mathilakam Records and also constructed a record room within the temple complex. The records are made of cadjan leaves and are called Churanas. The earliest known record dates back to 1336 CE. These archives (roughly 30 lakh documents) are known for their immense historical value and are the biggest, most detailed of the Grantha-pura in India. They not only give detailed information on the Temple but also of other temples, the evolution of Malayalam language, traditions, administration, politics, legal issues, international trade, foreign agreements, wars, concessions granted to other religions, purchases, list of offerings made by the royalties, festivals, rituals, etc. They include the mention of pilgrimages and visits of prominent people like Sankaracharya, Mahaprabhu Chaitanya, rulers of other princely states etc. Mathilakam Records are the key source of the information you are reading here.

Ottakal Mandapam – Rama Marthanda Varma constructed the special Ottakal Mandapam (platform made of stone) in front of the inner shrine in 1461 CE 1. This is the unique feature of the Temple. Detailed renovation work was done by him and a granite well 2 was also constructed in the compound.

Penalties by kings – Rama Marthanda Varma had to offer an enormous amount of gold and silver to the Temple to compensate for his wrongdoings against Jayasimhanad (his family member). In the chronicles of the Temple, there are such instances recorded – particularly of the kings, paying penalties and doing acts of compensation for something wrongly done by them directly, indirectly or even by priests.

In 1501 CE this King forbade persons from carrying any type of weapons 3 into the temple or wearing stitched clothes or headgears. This continues as the rule of the Temple. He ordered the making of special instruments to be played during Temple rituals. The parayanam (reading) of the Ramayana and Puranas in addition to Mahabharata, was started in 1499 CE and continues even today4. He ruled that the conch and Kombu (a wind instrument) were blown during the early morning puja and laid great emphasis on lighting up the temple with lamps. He did a grand scale renovation of the Temple. To avoid the risk of fire, the King replaced wood with granite in several parts of the Temple.

This King has been addressed with the title of “Sree Padmanabha Dasa”5. This was the first such instance on record found in the scrolls and hence an important mention.

This royal personage never became the king, but was instrumental in completing major renovation works in a short time, due to impending war. During his time, the army had women archeres6 and fought against the Vijayanagara Empire and Pandayas. It is believed that after defeat, the Pandaya King was accompanied by the then King to Sree Padmanabha Swamy Temple for worship. Such was the fine calibre of our Hindu rajas.

The historic formal appointment of ‘Sree Padmanabha Dasas’ in service of the Sree Padmanabhaswamy Temple was done in 1568 CE, by Udaya Marthanda Varma. It came with the details of rights, duties and privileges. The submission of the male children at the age of one to the Sree Padmanabha Swamy as his ‘Dasa’ was an age-old tradition, now made official.

The strong Queen had the task of bringing back the glory of the Temple through a period of great mismanagement by the councils. Breaking her own traditions, she shifted to Thiruvananthapuram to oversee the administration and also constructed a broad road for the Arat procession.7

Mukilan invasion – The empire weakened due to the rising terror of the powerful Ettuveetil Pillamar (Nair Lords of Eight Houses) and the Ettara Yogam. At this time, it was easy for a petty Mughal Sirdar, Mukilan’s forces, to invade. He over-ran south Travancore and did a lot of destruction. While Mukilan camped at Manakad, the Queen took shelter in Nedumangad. She sought help from the heroic Prince Kerala Varma of Kottayam to defend the kingdom. The battle of Thiruvattar saw the defeat of this Mukilan. Thereafter, the Queen’s position was restored and Kerala Varma built another palace in Thiruvananthapuram for himself. Unfortunately, he was murdered by the Ettuveetil Pillamar.

The Queen had made several adoptions. The matrilineal system said to be introduced by Sangramadheera Ravi Varma Kulasekhara (1200s) was followed and adoptions remained a common practice amongst the royalties.

Marthanda Varma was the child of a princess adopted by Umayamma Rani. Veera Rama Varma (1724), the King, saw great potential in his nephew Marthanda Varma, who was the official successor. Despite the threat of death inching from every corner, Marthanda Varma established his might and succeeded Veera Rama Varma to the Throne in 1729 CE. He is known as the ‘Maker of Modern Travancore’ without any exaggeration.

The next section of the series – Making of Modern Travancore, illustrates the reign of two outstanding Dasas – Sree Anizhom Thirunal Veera Bala Marthanda Varma and Dharmaraja Sree Karthika Thirunal Rama Varma. Important events like Sree Padmanabha Swamy becoming the Supreme Sovereign of the State and the epic defeat of the Dutch and Tipu Sultan have also been summarized.