The Param Vir Chakra was the amalgamation of the essence of a rishi and the love for Sanatana Dharma infused in a European woman.

The first of these ladies is the much idolized Agnes Gonxhe Bojaxhiu who brought her prejudiced mind to harvest the souls of the brown Hindoos of Kolkata.

On the other hand, the second lady Eve Yvonne Maday de Maros is a much more fascinating East European that we should be remembering in gratitude.

In complete contrast to Agnes, Eve Yvonne came to India attracted by its spiritual wealth and rich culture. Rather than converting the pagans, she herself became a scholarly and devout Hindu. Rather than harvesting Hindoo souls and looting Hindoo wealth, she gave us a treasure that would last for generations to come.

To understand Eve Yvonne’s contribution, we will have to begin our journey with the first India-Pakistan war that was precipitated by Pakistan’s incursion into Kashmir.

Merely weeks after Indian independence, the first Pakistani conflict had commenced. The lashkar (non-state militants – a standard Pak modus operandi to date) were empowered by the Pakistani state to invade and attack Kashmiris.

The situation was escalating rapidly. Prime Minister Nehru was convinced to organize our defence by Sardar Patel as well as a young Colonel Sam Manekshaw.

Following this, a young promising soldier with significant experience in Burma and the Second World War was sent to guard Srinagar – much to his disappointment as he was eager to fight on the frontlines. He was Major Somnath Sharma of the 4th Battalion, Kumaon Regiment. Growing up, young Som often lived with his maternal grandfather Pandit Daulat Ram in Srinagar, since his father, an army general, was often absent. He loved listening to his grandfather’s commentaries on the Bhagavad Gita. Krishna’s teaching to Arjuna inspired Major Sharma till the very end.

Even though his posting initially seemed uneventful, his wish for a challenge was fulfilled. His 50-man battalion was deployed to Badgam village to stop over 700 lashkars from advancing and taking control of Srinagar airport. Though significantly outnumbered, he showed immense valour motivating his troops and laying out cloth strips for the IAF aircrafts to land. His last message to Brigade HQ was: “The enemies are only 50 yards from us. We are heavily outnumbered. We are under devastating fire. I shall not withdraw an inch but will fight to our last man and our last round.” He and his men bravely halted the lashkars for over 6 hours and bought time for the Indian Air Force to arrive and drive them away. Yet, he and his entire team sacrificed themselves.

Three days later, his body was identified by means of the few pages of Bhagavad Gita in his chest pocket. 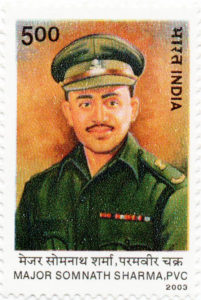 Such great valour and sacrifice could not go unrewarded. Even Nehru wanted to recognize this immediately. But what reward can be given? The British awards such as the Victoria Cross, the Medals of Honor or the Military Cross were no longer applicable for the newly independent country and no replacement award system had been instituted yet.

We Hindus have to thank our collective karma that a deracinated Anglicized brown sepoy or a secular Congress babu was not given this task. Instead, General Atal recruited Savitribai Khanolkar, the wife of an army colleague, Major General Vikram Khanolkar.

Who was Savitribhai Khanolkar? What were her credentials? Why was she the right person for this task?

Savitribai was not a native Hindu, yet Bharat Mata could not have picked anybody better for the award design project!

Savitribai Khanolkar was born Eve Yvonne Maday de Maros in 1913 to a Hungarian professor father and a Russian teacher mother. Her mother passed away and her father raised her in Geneva, where he worked. Right from childhood, she was a learner and nature-lover. Through her reading, she was already fascinated with India and other ancient cultures.

During one summer, when she was still a teenager, she met Major Vikram Khanolkar of the British army and fell in love with him. Her father naturally banned this relationship. However, in a few years, she left for India, landed at Vikram’s house and asked to be married! 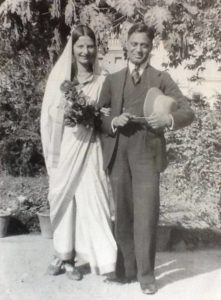 This is not a mere love story with a man, but her love story with Sanatana Dharma. After marriage, she fully immersed herself in India. She took the name Savitri, became a Hindu and vegetarian, studied Marathi, Sanskrit and Hindi, learnt Indian music and dance, and started her immersion in Hindu shastras. She always claimed that she had been “born in Europe by mistake as she was Indian in soul and woe unto him who dared to call her a foreigner”! She was fascinated with Hindu scriptures and had a deep knowledge of India’s ancient history and legends.

She has published two books – one on Hindu baby names and another popular one called “Saints of Maharashtra” published by Bhavans (that is still in print). After her husband’s demise in 1952, she joined Ramakrishna Mission, took sannyasa and died in 1990.

So, it does seem appropriate she was asked to design the Indian awards of valour. And what a design she created!

What makes a soldier a superlative soldier? While strength and skills are important, two major traits stand out – power and sacrifice. One without the other will not help but both together can save lives and a country. A powerful soldier is of no use if he isn’t willing to face death for a larger good. On the other hand, a selfless sacrifice may be worthless if it isn’t accompanied by a powerful defence or attack. A good Kshatriya combines these two traits adequately!

What award design can adequately represent both power and sacrifice? And how can it also be uniquely drawn from the Indian ethos as well? – These must have been the questions facing Savitribai Khanolkar when she was entrusted with this important task.

Savitribari was, by then, deeply well-read in Indian history/Puranas! Hence, her choice was a masterful one – she chose Maharishi Dadhichi’s bones as the symbol to be engraved on the Paramvir Chakra. The medal has 4 repetitions of his bones surrounding the national emblem in the centre, symbolizing how power and sacrifice of the soldier will protect the nation. 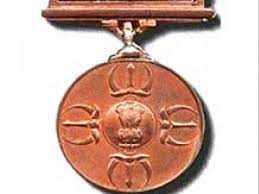 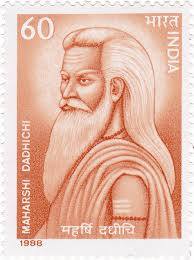 A long time after, there was an asura called Vritra who captured all the waters of the world and created a long, terrifying drought. Vritra had acquired a boon that no weapon made of wood or metal or stone can kill him. Indra wants to kill Vritra and asks Maha Vishnu for advice. Maha Vishnu tells him that only the bones of the great tapasvi Rishi Dadhichi can kill Vritra! Being desperate, Indra shamelessly asks Rishi Dadhichi to give his bones.

A lesser man would have refused to die, especially to die at the request of someone who had chopped his head once! But it is said in the Puranas that Rishi Dadhichi instantly went into samadhi and gave up his life, forgetting his enmity for the larger good. His bones yielded Indra’s Vajrayudha which eventually killed Vritrasura and saved the earth!

Sacrifice and power are hence symbolized by Rishi Dadhichi’s bones.

We owe immense gratitude to Savitribai Khanolkar who picked this profound symbol for the Param Vir Chakra design and brought this pouranika story into modern India’s ethos. In the process, she strengthened the civilizational thread that has been running across aeons in our sacred land and that will take us well into the future, Sanatana that it is.

We also bow down to the various Param Vir Chakra and other awardees for exemplifying the example set by ancient Rishi Dadhichi.

Deepa is an Advaita Vedanta student and blogger/storyteller. She is on an enthralling journey to unfold the timeless wisdom of Shastras, Itihasas and Puranas in the royal path laid out by her gurus, sharing her learnings through her decade-old blog, Hamsapakshi. She speaks and writes on Hindu parenting, with no special qualification other than experimenting on her own three children! She is a content and product marketer by profession, peddling technology products and services.

Previous PostNandi: Puranas and the Science of AttentionNext PostThe Story of Islamic Imperialism in India – Part 1

The Colonial Genesis of Anti-Brahminism

A country is never fully defeated as long as its martial and intellectual leaders exist. A self-conscious imperialism undertakes to reduce them as its first important task.